Notice: Trying to access array offset on value of type null in /var/www/wp-content/plugins/cta/classes/class.cta.render.php on line 492
 Business cases that close deals, get promotions, and lift companies out of debt - Westgate Career Coaching

When you’re pitching to the board or an investor, there is nothing more powerful than a case study to tell a story about what’s possible for the business.

Your resume and other marketing collateral will be socialized among the executive committee and the board of directors so it’s important your story is clearly articulated and attractively presented. Your headshot on the case study will form a crystalline impression on the reader. You will be memorable. 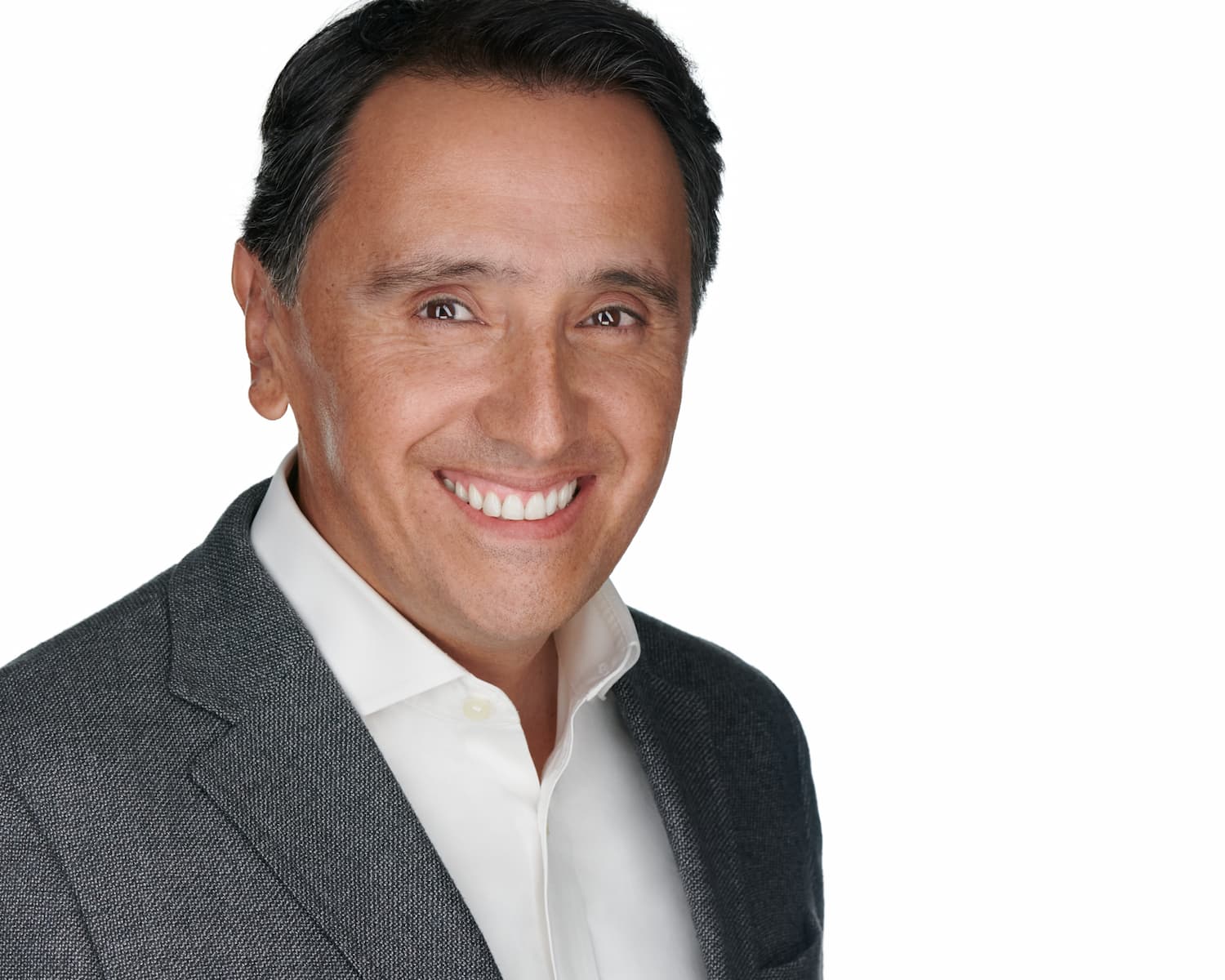 Business cases are relatively easy to prepare because your story already exists.

They are stories from your past that are likely already published in your resume, your former performance reviews, or as memory in your mind.

The case study will prepare you for the pitch because you’ve taken each aspect of the story and carefully laid out the details and the context. Stories activate several centers in the brain whereas facts told without a story activate fewer centers of the brain.

Your story provides context. It provides clarity. It delivers confidence. And in 98% of the cases, your competition will not take the time and effort required to produce such a quality asset.

Here is an example of a case study story worthy to consider, and you likely have similar stories to tell in your own experiences. You may worry that the story you tell is not completely about yourself. You had others help you with the achievement. As a leader, however, decision-makers will understand that you were ultimately accountable for the outcome. No one works alone and as an inspirational leader, your team supported your achievements.

The following are two stories with one powerful outcome. One success led to the second success thereby forging a long and trusting relationship with global Fortune 100 companies and government officials in Argentina.

In my interview with Andres, this is what he told me: 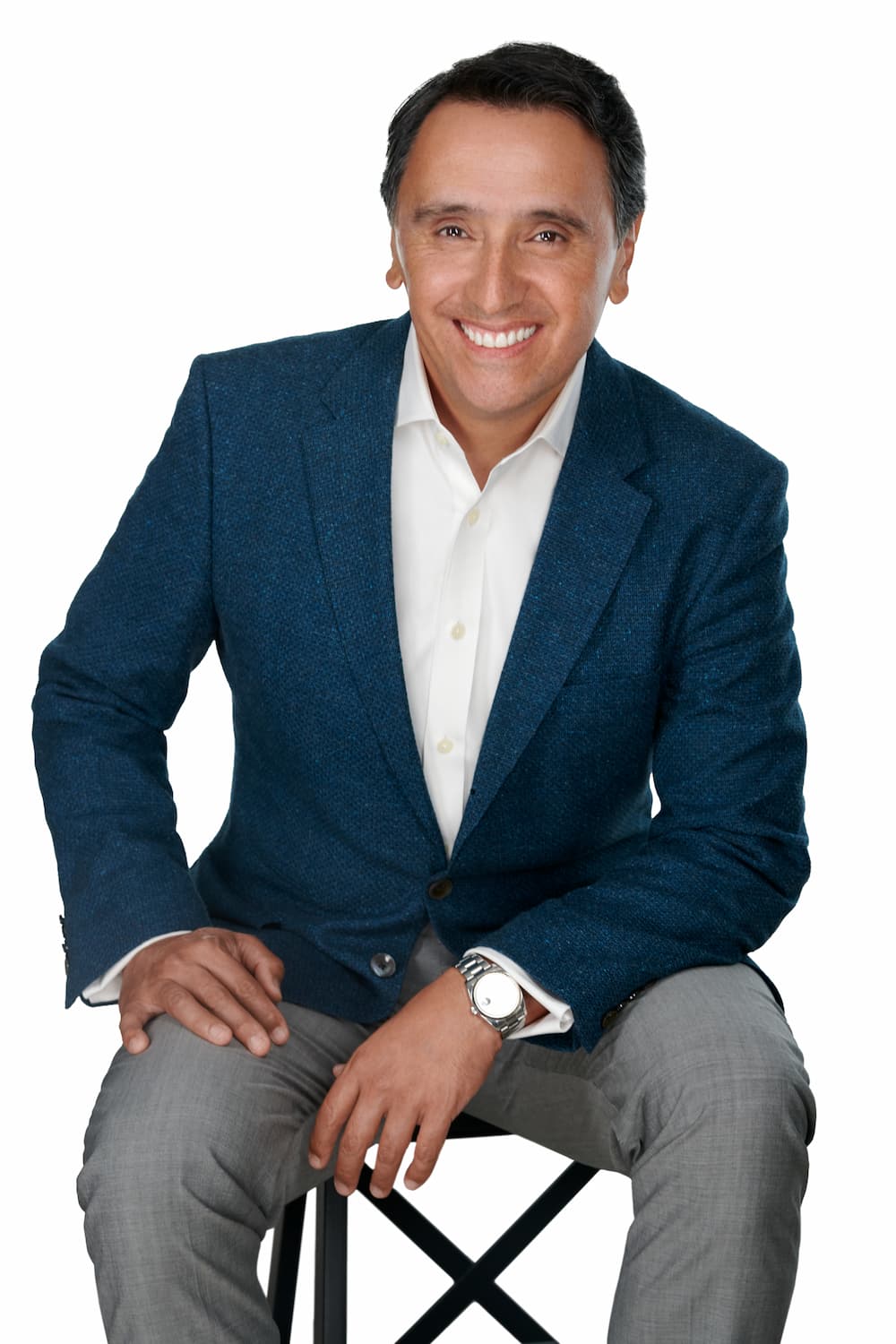 "Late in 2015, after assuming office, President Macri declared a state of emergency for the electrical system, which enabled the government to levy a major reform. Its energy matrix relied heavily on imported hydrocarbons (85% of the energy mix, natural gas represented 50% of the total and hydro represented 5%).

In March 2016, the Ministry of Energy issued an international tender for thermal generation capacity: 40 MW or more per power plant and each generator unit no less than 10 MWs with diesel and natural gas. Contract terms were minimum 5 years to maximum 10 years, with minimum specific fuel consumption. The tariff levied fixed and variable with 3 delivery windows

Cammesa, a highly technical entity, was granted authority to manage the process. The evaluation team would be strictly technical, and our proposal would be deeply scrutinized. Quality was critical to its acceptance.

In parallel, I evaluated the best locations for the plants—where the gas, electrical substation and land would intercept. Technology was an additional challenge because we were committed to working exclusively with Caterpillar, and they did not have the best technology for this project. I therefore found two alternatives (one dual fuel MSE Wartsila and other large turbines from GE and Siemens).

This situation presented a further challenge, Wartsila is a competitor of Caterpillar and the Company had not installed or operated this type of equipment before."

The pitch to the board of directors

“I needed to convince the Board this technology was the best solution while mitigating the risks, such as: delivery time (COD, Commercial Operation Date), fuel efficiency and O&M.

The risks were appropriately mitigated, financing in place, and two 60 MW plants were installed on budget and on time. The equipment met all technical and commercial aspects was Siemens with its aero-derivative turbine Trent-60.  It was first time in Siemens’ history this type of turbine had its “first fired” in only 8 months (vs a standard of 10 to 12 months).

The next steps in our journey

“Our reputation in the execution of this project and the good relationship with Siemens led us to a Mega project, 700 MW with a Canadian Company, named StoneWay, that had won 4 plants under the same resolution.

After dozens of conversations and negotiations, we acquired 40% of the Canadian Company, which was developing 4 highly efficient simple-cycle power generating plants near Buenos Aires with a COD (Commercial Operation Date) of December 1, 2017.”

“Time was of the essence, and considering the challenge of financing in country, we knew that project financing or conventional debt was not going to be in placed in the time frame required to built and have all power plants ready by the COD.

Contrary to what the banks and financial institutions were telling us, we decided to issue a $500 Million of senior security notes (Bonds); something not done in Argentina for over a decade.

To be successful with the Bonds, we identified that Siemens, the manufacturer of the equipment, needed to take a leading position on the team to assure future bond holders that the projects were going to completed with the appropriate level of expertise.

Based on my experience with financial institutions, construction completion is the primary risk associated to these types of projects. This is why we persuaded Siemens to be the main sponsor delegating the overall project management for the construction of the four power plants.

Four (4) power plants were required to be built simultaneously. We structured EPC consortium agreements with Siemens. Recognizing the limitations of the company I was leading, I decided to participate as a consortium partner to execute the EPC of two of the power plants.

The other consortium partner for the other two power plants was Duro Felguera, a very reputable EPC company and one of the main Siemens partners to execute EPCs globally for them, and SoEnergy was this small Company that was not known in Siemens’ world and that successfully “first fired” two Trent-60 turbines in 8 months. All Siemens’ eyes were going to be upon us.”

“With this strategy, we initiated the road show to raise $500 Million. After two very exhausted weeks of traveling in the US and Europe, the bond was oversubscribed.

We then initiated the road show to raise the USD $500 million.

After two very exhausting weeks of traveling in the US and Europe, the bond was oversubscribed.

The money was raised, and the 700 MW power plants were successfully built 3 months ahead of schedule and on budget, a radical departure for completion for this type of project.

To the surprise of many, major labor union issues were mitigated through a creative “off-site” construction of key components of the plants speeding up the construction operation date.

Your brand speaks for you when you’re not in the room. 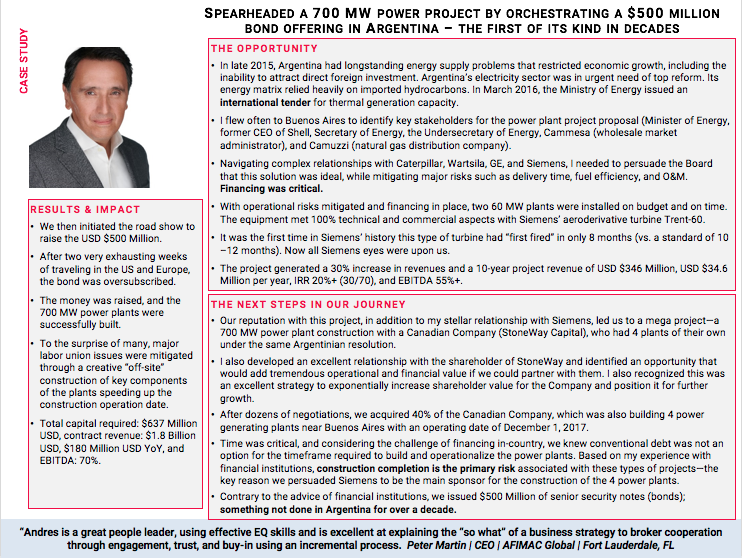