Notice: Trying to access array offset on value of type null in /var/www/wp-content/plugins/cta/classes/class.cta.render.php on line 492
 Stakeholder capitalism, the new CEO, and the board of directors - Westgate Career Coaching

Stakeholder capitalism, the new CEO, and the board of directors

Get the most out of your CEO experience with our new checklist. 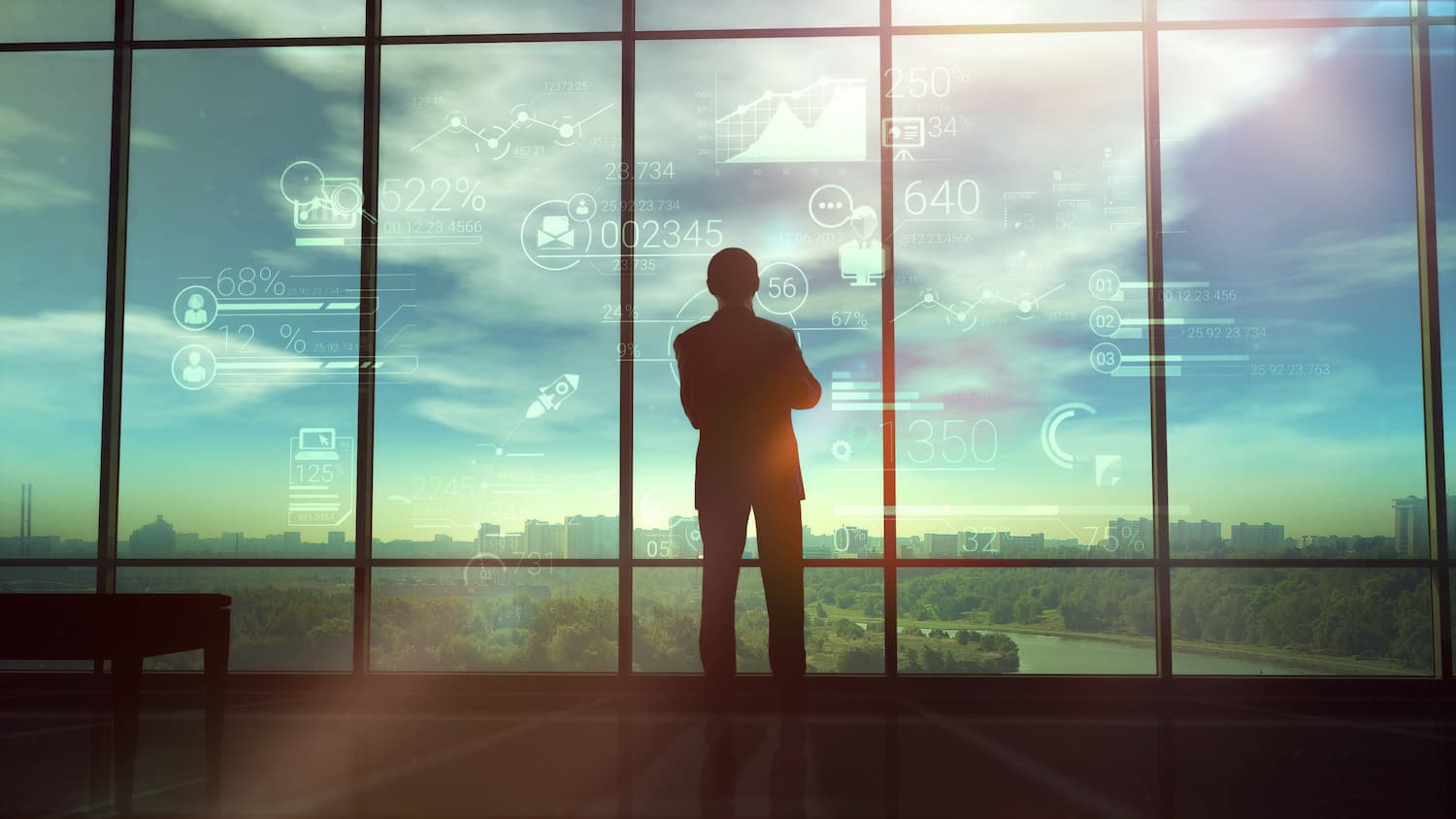 Managing up with your new board

For the first time in your career, if you’re a first-time CEO, you don’t have a single boss. Your new boss is the collective board of directors. Navigating the relationship with the board can be tricky unless you plan ahead for a positive start.

According to “After the Handshake Succession doesn’t end when a new CEO is hired” by HBR’s Dan Ciampa, 30 percent to 50 percent of newly appointed CEOs will fail within 18 months of their appointment.

There are hundreds of potential reasons for this failure and one such reason is the CEO’s failure to establish a trusting relationship with every member of the board rather than solely with the Chair of the Board. In the same article mentioned above, “clear expectations are among the most critical things directors can provide.” (p. 8).

According to CEO and Chairman of the WD-40 Company, “one of the challenges boards have is the short-termism of Wall Street from time to time that says, 'You’re only as good as your last 90 days.' It’s a bit like one day the rooster, the next day the feather duster. And you’ve gotta...be able to put together a future plan that gives the investment community confidence around the fact that there are gonna be some 90 days that are better than other 90 days.”

You must also have a plan to instil confidence in the board, and it begins with establishing transparent relationships with your new board. “The new leader cannot be considered truly embedded until he wins the loyalty of the organization’s most influential managers.” (HBR, p.8). There are many stakeholders the new CEO must satisfy especially during the first several months in the role.

In my recent conversation with Beverly Behan, CEO of Board Advisor, LLC on the Get Hired Up! Podcast, we discussed the new CEO’s transition and some of the mistakes they often make with their board of directors early on. She indicates that once the horse is out of the gate, it’s very difficult to get the horse back.

Get our CEO/Board Transition Checklist here 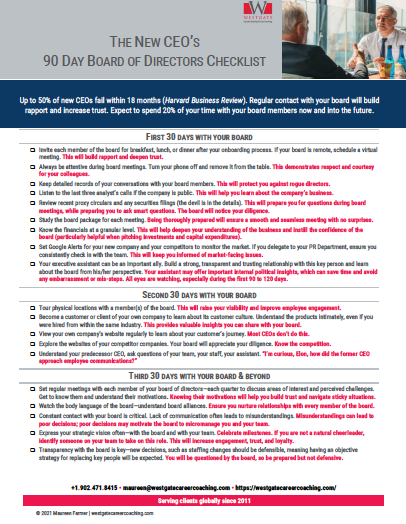 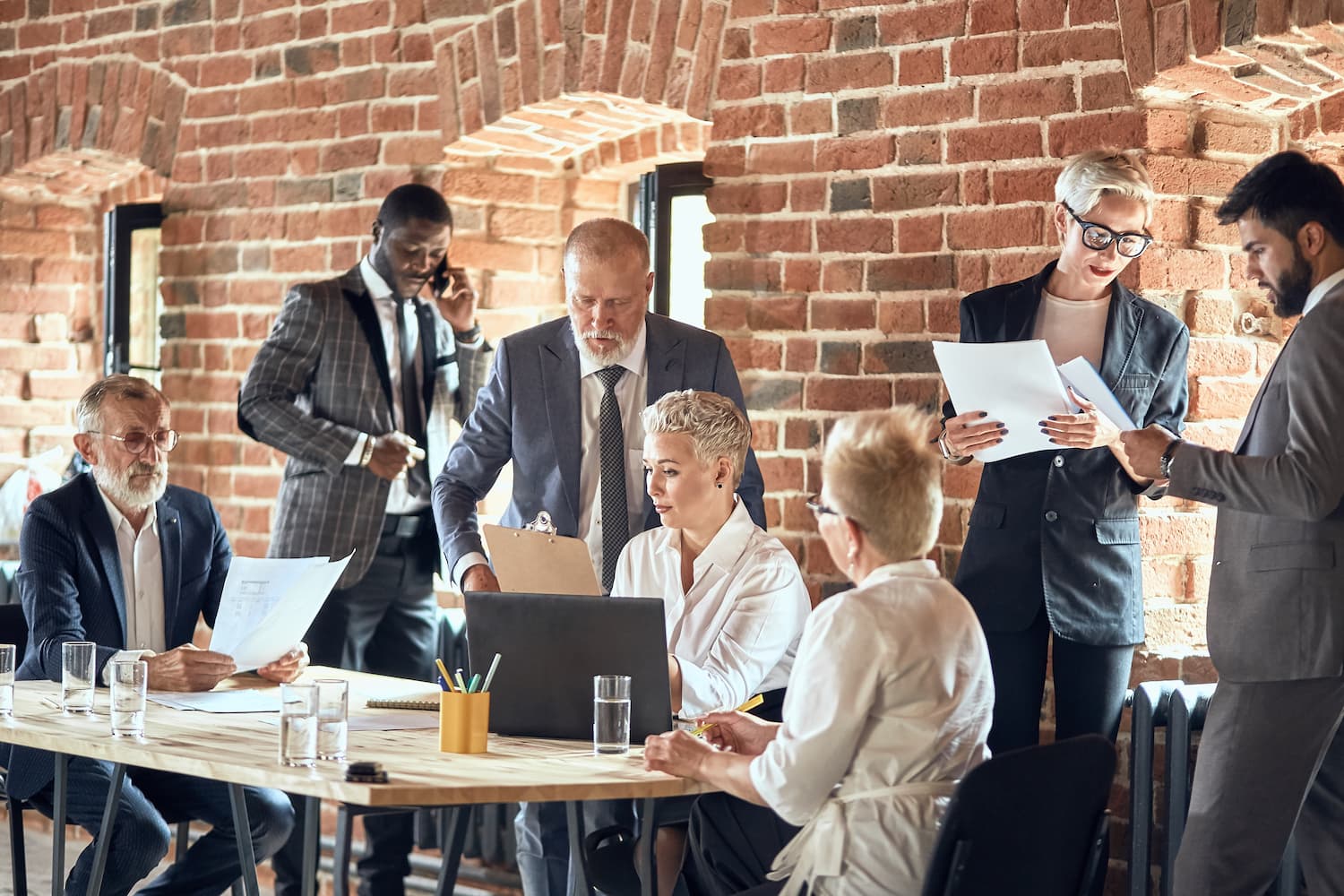 New CEO Mistake # 1 – Not knowing who your new boss is

The flurry of job interviews, team meetings, dinner meetings, and extensive security clearance process may feel like an appropriate onboarding to the new role. However, that process is yours as a job candidate, not as an organizational leader. There is much to be done to complete an effective transition.

According to Beverly Behan, Board Advisor, LLC, the level of engagement with the board can be up to 20% or more depending on the state of the business. If there is a crisis situation, it will be more. If the former CEO was not performing to standard, the board may want to micromanage until the new CEO establishes trust and credibility with the board.

Not understanding the limitations of decision-making at the board level. Understanding the corporate bylaws in terms of director terminations is key to managing director performance. While terminating a direct report to the CEO can be easily executed, terminations at the board level are vastly different. The degree of executive power over an executive team is vastly different from executive power over the board or its individual members.

According to Beverly Behan author of CEOs and their Boards: How to Build a Great Board Relationship and a Great Board, (2021), “Unlike corporate leadership, board leadership is multi-dimensional and not always straightforward. Any CEO who believes they only need to focus on building a good working relationship with the Chair or Lead Director misses this essential point.” (p. 25).

Get our CEO/Board Transition Checklist here 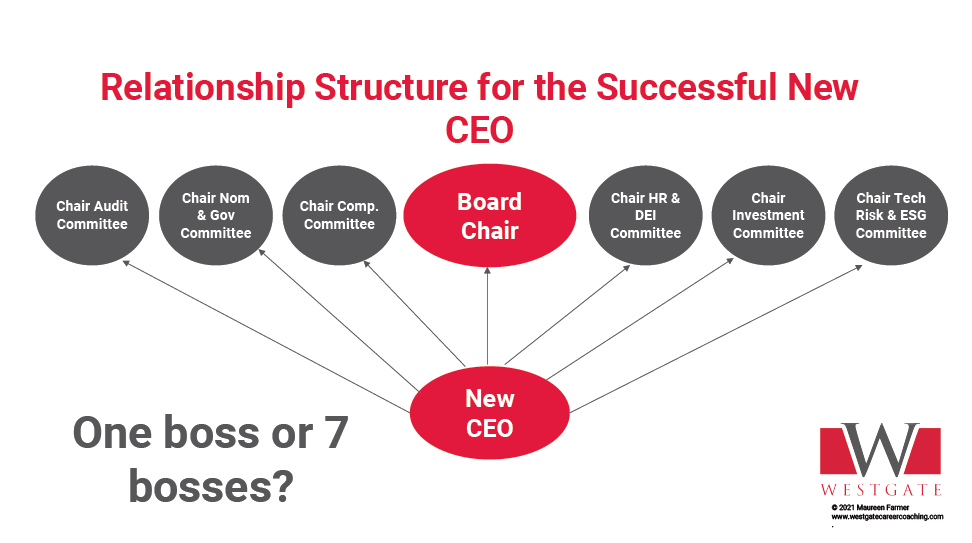 It is appropriate and wise for the CEO of a founder company to understand the emotional complexities that arise from the relationship with a Founder who has created the company and its products from the beginning. Not being sensitive to the sensitivities of the Founder can be problematic for the new CEO, especially if they have been recruited externally.

Role ambiguity and lack of clarity around the company’s vision can create tremendous inefficiencies in an organization because the right hand doesn’t know what the left hand is doing. I’ve experienced this myself during my years in corporate (when I was much, much younger). As a junior staffer, I would watch carefully around the boardroom table and see that one person was not communicating clearly and by watching the body language of the others, I understood immediately that there was confusion. Speaking in corporate-ease and industry jargon isn’t helpful and assuming that others understand your version of the vision is a significant mistake.

In a resource we published a few months ago, we lay out a 90-day plan for new leaders and the key deliverable, even ahead of the budget, was communicating to and celebrating with the team for key milestones achieved along the way. Human beings are born to want to belong and feel accepted by the group and a key component of this is two-way communication and recognition by the leader. Of course, this is no different in a board of directors meeting. Everyone wants to feel heard and be seen.

Don’t forget the rest of the board as you onboard as the new CEO. 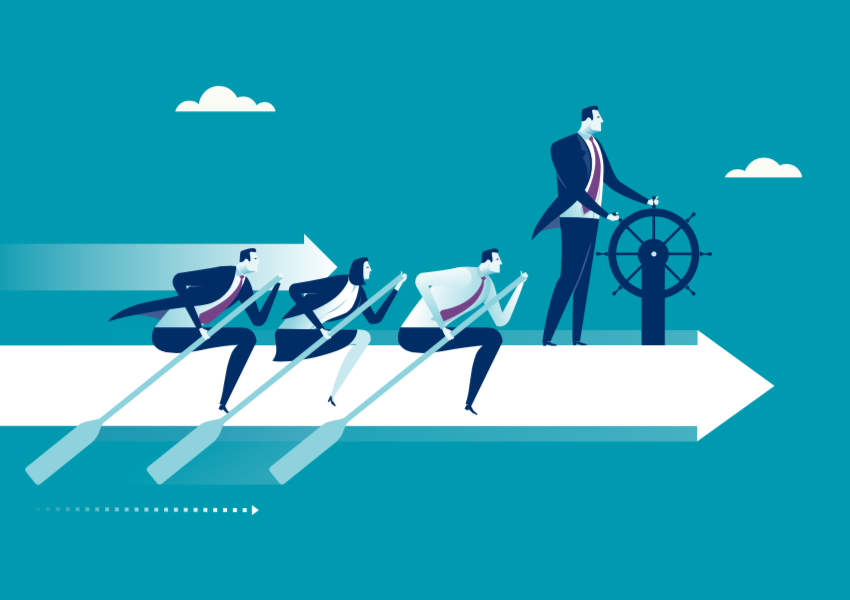 A note to aspiring CEOs

As an executive advisor and consultant, I speak to many bright future-minded executives from around the world who are pining for the CEO role, and some are even obsessed by it. “How do I speak the language of the C-Suite?” This is a question I hear repeatedly. I also hear “C-suite executives seem to be arrogant or conceited. Why don’t they respond quickly? Our CEO changed when she became the CEO.”

I believe the answers to these questions include accountability and perspective.

Among the multitudes of responsibilities of the CEO, there is one that remains at the top of the list and for good reason: risk mitigation and risk management. What many non-CEOs may not see is the degree of risk CEOs must manage each day, and some risks are significant, such as financial, legal, and human capital risks. A major headcount layoff may negatively impact the GDP of an entire region at some levels. And then there is the board of directors the CEO must appease because they need to approve the plan.

The burden of responsibility often renders the most convivial CEO gripped with fear because of the massive issues they must face. If they are leading a publicly traded company, the potential risks are amplified because of the SEC disclosure requirements and reporting deadlines, to name only two.

The CEO may have the top job in an organization, but they are far from in control. Consider the board of directors alone, external auditors, industry regulators, financial regulators, lobby groups, media, shareholders, investors, customers, and employees.

CEOs who understand the complexities of “stakeholder capitalism” as the careful investment of time and consideration that must be afforded to all constituents are positioned for success. Success begins with a good plan. 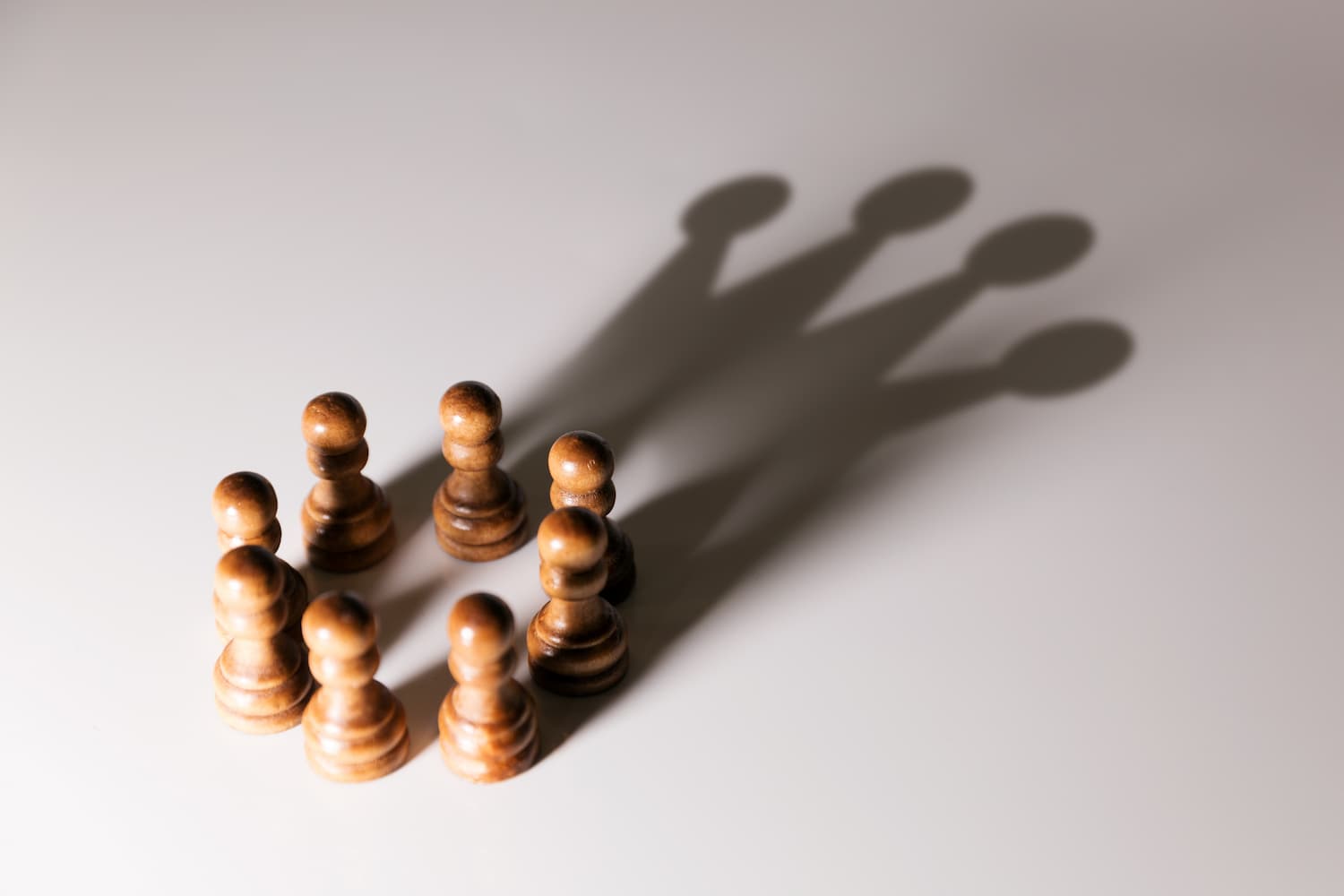 3 steps to a LinkedIn profile headline that will jazz recruiters